Baron of Edenmore, The Rouge Rogue

Harold is a young, ambitious man, that was thrown into the role of ruler after meeting his end and subsequent resurrection at the Staglord’s Fort. Though a rogue by trade, he has also dabbled in the alchemical arts, and has learned a little bit of everything. He relies on his wits, improvisation, and guerrilla tactics rather than straightforward combat, and would sooner make friends of an enemy than a corpse. While adventuring, Harold often dons a blood-soaked leather garb and equipped with a rapier, but also is sure to bring along cloaks and other clothing should he need disguise himself as someone else. While at court, Harold has displayed wisdom beyond his years, no doubt humbled by the experience of death. Harold’s face is scarred from rough encounters in his past, he has auburn hair, hazel eyes, and a well-groomed goatee. He has a tall, slender build.

Harold Gules was born of middling circumstances, to petty lords in the western lands by the name of Redd and Scarlett. As a second son to a lord over goat herders, Harold was not impressed by his prospects at a young age, and left the westernlands to travel north to country of Restov, where he began his apprenticeship in the rougish arts.

Walking the line between bandit and mercenary, Harold became competent enough to be interested in a proclamation of the Swordlords of Restov, to map out the lands of the Stolen Belt, where the reward for readying the area for Restov rule was great. Harold saw opportunity not only for gold, but for land as well, lands he aimed to make far greater than that of his lord father’s. As he adventured with fellow Restov adventurers, he dabbled in the alchemical arts, and studied the various arts in hopes of readying himself to be a lord well above his father.

When the Stolen Lands were all but clear, Harold was given his greatest test. The Stag Lord, chief bandit of the region, was all that stood between him and a promise for land and gold. Harold and his fellow adventurers concocted a plan to infiltrate the camp as fellow bandits, so that they may assassinate the fearsome leader. On one cold, rainy morning in Erastus, Harold led his fellow adventurers into the Stag Lord’s Fort, and was able to bamboozle the other captains and lieutenants in the Fort into believing he had captured thieves that had stolen ale from the Stag Lord’s brew. Eager to have the Stag Lord witness their execution, Harold did everything short of revealing himself to summon the passed out chief. There came a point however when his fellow adventurers could no longer risk the disguise, and launched their scattered attacks on the fort. An intense battle awoke, though Harold would not break. He continued to misguide and confuse the enemy in an effort to save his friends while killing the Stag Lord, but he was denied seeing the success or failure of his actions, as he was cut down by one of the Stag Lord’s lieutenants.

An eternity passed. Harold walked across an empty field that slowly grew around him, endless, perfect, serene. He’d walk to villages, towns, cities, where the people were prosperous and happy; unburdened by war or famine. Harold was certain it would last forever; until a voice came and bid him wake up. And so Harold did awake, surrounded by his fellow adventurers. Confused, his comrades explained that their efforts had not been in vain and the Stag Lord was defeated. Though joyed to hear the news, Harold could not help but feel a mourning for the perfect lands he lost while he walked his endless dream. But his sorrow was replaced with shock when his fellow men proclaimed he must rule these Stolen Lands. To become a lord was one thing, but to rule…such a thing had never occurred to Harold.

As Harold weighed upon the offer he realized that his dream was but a vision; a hope that such a place could exist, and he could build it. Rejuvenated by this revelation, Harold accepted his task to rule, and deemed the Stolen Lands thereafter as Edenmore. 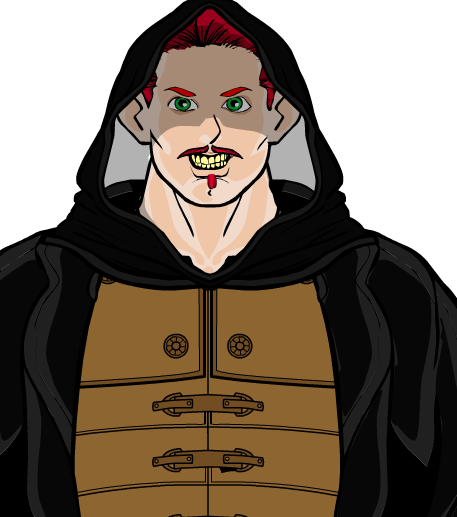