Lord Dieter-Heur before he was informed his greatest weakness was magic.

Ralphiel Deiter-Heur or Ralph as his compatriots have dubbed him, cares only for two things, his nobility, and the realm. He is loyal to a fault, and would give his life for his kingdom. He does however tend to get a bit too reckless and risk his life over trivial things, such as duels.

SPECIAL ABILITIES
Missile Shield: Deflect one projectile attack per round if a shield is equipped.
Diehard: Auto stabilize and keep fighting disabled at negative hit points.

When he was a young boy, growing up under the care of Grelod the Kind, he would hear stories of his family and their privileged lives. About how they were lords and ladies who knew no hardships and had all they had ever wished for. Then as he got older the stories started to become darker, public scandals, affairs, gambling. Finally his family had nothing left, and was forced into servitude about sixty years past in order to pay off their debts. While some adjusted and even flourished, most could not handle working with the peasants and lives short lives after. Ralphiel was descended from one of the few who prospered.

Unfortunately, in what seems to be the case of most adventurers, Ralphiel was an orphan, his father killed in a bandit ambush and his mother from childbirth. Not knowing family, he chose to focus on how much better a life of nobility sounded. So from the young age of eight he decided that he wanted to become a noble more than anything else in this world.

Unfortunately, Ralphiel being an orphan was poor, so he chose to pursue his goals by becoming a knight. He play sword fought with the other boys and always volunteered for the more intensive chores around the orphanage. So he grew, always training his body, but never knowing how to continue, until one day when he was twelve he walked into main room and saw a bandit attacking Grelod! Not thinking he threw himself in front of the women and took the blow.

When he had awoken, he soon learned that he had saved Grelods life, buying her enough time to knock the bandit unconscious. This action also had the benefit of impressing the town guard who quickly took Ralphiel under their wing. With them, he slowly learned to actually wield a blade, and while he was proficient, he also realized that the shield was truly what spoke to him most.

When he turned sixteen he formally joined the town guard, helping escort caravans and defend the town from wild creatures. He was happy for a time, but then the great wandering bard Claudio came to town. With his songs, he told stories of great adventurers who fought dragons, who sailed the seas, slaying titans, and swooning princesses. He told stories of love, betrayal, and of defying destiny to carve your own fate on the head of the gods. Ralphiel was moved to tears, he had gotten complacent, where was the drive he had as a child, when did he stop caring about his dream?

So, the very next day at the age of nineteen he quit his job, leaving the city to make a name for himself. For the next three years he traveled and did all he could do be a defender of the weak, a shield for those less fortunate. Then his chance arrived, he was approached by the Swordlords, requesting help mapping out the stolen lands. Finally, a chance for gold, but more importantly fame.

So Ralphiel journeyed to the Stolen Lands were he stumbled across another group hired out by the Swordlords, together they managed to weather a forest fire, and take down a bandit camp. While he got along with most of them, the way they treated prisoners disgusted him, so he left on his own, as to not shatter the beginnings of a new friendship.

On his journey he discovered two major points of interest, a Kobold tribe who seemed to be peaceful enough though he knew not the language (Something he vowed to rectify as soon as he could), and… the ghost.

Never before had he felt so weak as when the ghost held his head under water, vision darkening, lungs burning. He had not accomplished his dream, he could not die here. Then he was set free and made an offer. “Slay the Stag Lord and return his corpse to me, and I shall spare your life this day.” Quickly agreeing Ralphiel went searching for the adventures he had met weeks ago, hoping for their aid.

Luck was on his side as he discovered that they had planned to attack this very week. So Ralph joined them on the raid, disguised as a prisoner, he tried to free another man. Unfortunately the man was not as helpless or as cooperative as he had hoped, and while the strange old man could not harm him, his cover had been blown. Fleeing the cells Ralph soon came face to face with a Bugbear. After what felt like hours of fighting however, the Stag Lord fell, at the cost of one of his new compatriots.

After disposing of the Stag Lords body in the river that the ghost had specified Ralphiel was gifted a magical spear and spared the wraiths wrath. The group received news that they had been granted lands, and one of them was to be made a Baron! Ralphiel coveted the title more than anything, but agreed that one of them had gone beyond the call and deserved it more. So the newly resurrected Harold Gules was made Baron.

However Baron Gules surprised Ralphiel, and granted him a minor title. While small, and owning next to no lands, at the age of twenty three, Ralphiel’s dreams had come true, he was a noble. Now all that was left was to protect the interests of the man who made it all possible.

And so Ralphiel served the Barony for a year under the title of Warden, before he heard of another new ally’s plight. Akiros required assistance on his quest for redemption. Being moved by his plight (plus seeing the advantage a divinely sanctified paladin would bring to the kingdom) he set out with Macule Drihawk to aid Akiros.

After a long days work, and helping drive off bandits and griffons alike, there was only one thing to do. Divide the loot. While most of it was simple there was one item Drihawk and Dieter-Heur both lusted after. A ring of sustenance. Using a simple duel as a way of determining ownership they fought. Destiny must of had other things in mind however as he heard Macule say “You are far to vulnerable to magic, my friend”. With those word he felt himself start to fade. His last words uttered with a smile: 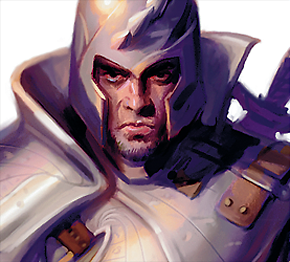